TEDx Soweto – A great day out!

The first TEDx Soweto happened on Freedom Day — 27 April in South Africa — appropriately held at the Apartheid Museum. The theme was “The Age of Participation”.

It was a fun and interesting day, with lots of different perspectives and stories — less of a technology focus than the usual TED formula, which I think really worked. A key theme throughout the day was the highly differentiated society of South Africa, with so many people not really having access to meaningful participation in the Web 2.0 way that many of us in the audience do. Not everyone has an iPhone, not everyone watches YouTube. I spoke about literacy in the age of participation, mainly covering the findings of the m4Lit project and the huge potential of mobile phones for literacy development in Africa. A key point I made was that in the developing world participation for most people will happen through mobile phones.

For me the following speakers and messages were highlights. Speaker bios and links are on the TEDx Soweto site.

Khaya Dlanga, blogger, ad exec, youtuber and general good guy, told his life story (in a very funny way!) — about a rural herd boy form the Transkei who, by the age of ten, had already kicked a marijuana habit; who had to drop out of advertising school because he couldn’t afford the fees; and about his first CV, based on which he was immediately hired. It was for a copy writing job and contained something along the lines of:

I’m black
I don’t belong to COSATU
Some of my best friends are white
I used to write FREE MANDELA and ONE MAN ONE VOTE on school walls
As you know, that was a very successful campaign

When he first started posting videos on YouTube — before he became famous — he deliberately used an oblique username so that he wouldn’t be recognised (“Back then it was embarrassing to post videos of yourself on the internet!”). He spoke about the need to create a narrative about yourself on the web before others create one about you. Think about what your strengths are, who you want to be, and be it. He ended by recalling how this herd boy came to ask Barrack Obama an interview question via YouTube, clearly an achievement he is very proud of!

John Perlman, radio presenter and football philanthropist, spoke about the Dreamfields project, his way of getting involved in the 2010 Soccer World Cup. Dreamfields provides sponsored sports kits (Dreambags) to school kids in South Africa. Everything to kit out a whole team is in the Dreambag. They also build soccer fields and hold regional tournaments. One school to which they gave the kit beat Morocco Swallows U19; another of their teams became provincial champs within 6 months. It’s an awesome project that is making a real difference in the kids’ lives. The bit I liked the most was that Dreamfields is not about finding the next Ronaldo or Kaka or Lucas Radebe. Rather, it’s about helping kids have a dream and be the best at whatever they do, whether they become Constitutional Court judges, CEOs of top companies, plumbers or carpenters. There are many roles in society that all need filling — the key is to be the best at whatever you do. Go John!

Steven Newton, head of Google SA (not for much longer though), spoke about the need for relevant, affordable content in Africa, which will be accessed via mobile phones. He’s not too worried about the issue of access to mobile phones — that’s a problem that can be solved (I agree — mobile phones present more of an effective use than an access issue).

Simon Gear, environmental scientist, offered a way for each individual to do their bit to arrest climate change. He asked us to picture a triangle with health, wealth and happiness at the corners. Through examples he showed that by improving any 2 of the 3 of those, the environment will be helped. For example, by going for a walk in a park you improve your health and your happiness. Well used parks are better looked after by the municipality, so the environment is helped. Or by eating less meat every week you improve your health and your wealth (veggies are cheaper than meat). “Factory farming” of animals is reduced this way — so the environment scores. On the issue of happiness, he pointed out that people who spend their money on experiences are happier than those who spend it on things. Basically, we need to buy less and do more.

There were interesting ideas through violin sounds from Samson Diamond, the Standard bank Young Artist of the Year for 2010. Along with his sister and another co-performer, he made beautiful music to demonstrate that it takes different sounds (people) to work together in a way that is harmonious (like a true society should be).

We were taken on a dreamy journey through the three principles of drawing by Khaya Mtshali, graphic designer, lecturer and wise young soul.

To end the day BCUC gave a blistering performance — one 25-minute song that left the performers sweating! 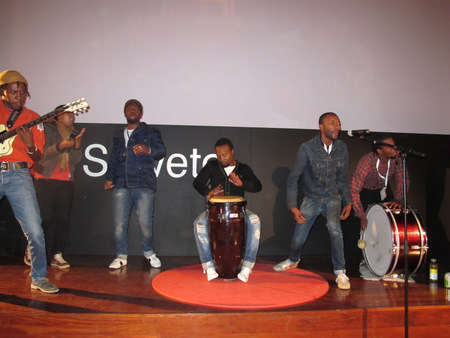 One or two participants didn’t stick to the time schedule (obviously not familiar with the strict TED approach). They also could have made more of a point, a message. I wasn’t sure what the big idea was that they thought was worth spreading (the TED motto).

Overall, though, I thoroughly enjoyed it and found it a valuable day. Big up to the TEDx Soweto team for organising the event (and self-funding it after potential sponsors dropped them at the last minute). The organisers pointed out that they’ve had to really sell TED as a concept. For so many of us TED is the standard for big ideas and compelling presentations. No sell necessary. We all need to do our bit to raise awareness in SA of the value of the TED model, and the exciting potential of holding our own TEDx events. African solutions to African problems!

This entry was posted in Uncategorized and tagged m4Lit, tedx, tedx soweto. Bookmark the permalink.

One response to “TEDx Soweto – A great day out!”