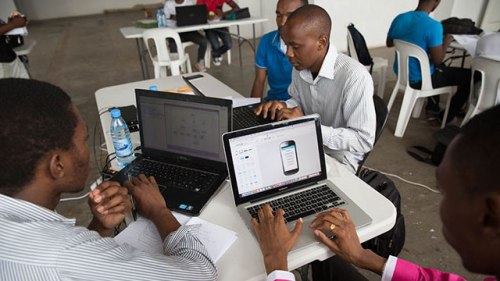 UNESCO, in partnership with Pearson, has released the final batch of case studies of digital solutions that are inclusive for people with low skills and low literacy, helping them to participate in the knowledge society in innovative ways. The case studies, authored by Dr Nathan Castillo and myself, were released during UNESCO’s Mobile Learning Week.

The new case studies are:

The latest case studies affirm the six digital insights drawn from the earlier cases in the series. Each has an interesting story to tell and is well worth a read.

For me, MOPA is particularly interesting because it demonstrates how a user-centred design approach and the inclusion of different stakeholder groups can empower citizens and strengthen accountability for public service delivery. It demonstrates six digital practices that are instructive for ICT4D practitioners.

Maputo has a serious solid waste management problem. Many of its 1.2 million residents live in informal settlements, hard to reach because of poor road infrastructure and dangerous during flooding because of drains and rivers blocked by trash.

The Maputo Municipality attempted to address the solid waste challenge by outsourcing waste collection to private companies which used waste removal trucks in the urban sectors, and micro-operators using pushcarts for suburban neighbourhoods. Overseeing and quality controlling such a decentralised network of 45 operators proved to be very difficult.

Today, through the participatory digital reporting and monitoring MOPA platform, citizens are encouraged to report waste issues and monitor the public waste management service in the Maputo Municipality via USSD, website and, most recently, via Android app. After a year, 3,500 registered users have contributed almost 7,000 sanitation reports to the MOPA digital system, 96% via USSD.

It’s a really cool project, basically what happens when a UX company – UX Information Technologies – teams up with city government – the Maputo Municipal Council – and gets support from the World Bank. The development process followed is thorough and the solution is wonderfully pragmatic.

Understand the Problem, Engage All the Users

Good product development means we should design with the user and understand the existing ecosystem. The MOPA team decided to do this through four types of workshops to gather user-oriented design insights, validate workflow systems, and collect ideas for improving the service.

Citizens can report on particular rubbish containers to say, for example, it is full or burning. Containers have physical locations, but residents don’t identify containers by address. MOPA found out that they rather refer to them in relation to something, for example, the receptacle in front of the Custodio warehouse is the ‘Custodio’ container.

The MOPA team mapped the city with these peoples’ labels, which improves the reporting quality and better fits the residents’ language. In the background the system can match the peoples’ label with the official address.

To submit a report, the MOPA platform requires three data points for location identification: municipal district, neighbourhood and place. But how do you get citizens to report based on location when they don’t have GPS? Keep it old school with paper and USSD.

As part of its awareness-raising campaign, the UX team produced posters that were distributed in all neighbourhoods with a unique USSD string for each container. Each string captured the essential location data.

By storing the USSD string as a contact under ‘MOPA’, whenever residents want to register a report the key location data is already captured and they go straight to specifying the type of incident.

While disruptive innovation is the rallying cry of today, the MOPA team did not try to become the “Uber of” waste management. Instead they decided to work within the current parameters, but bring efficiency to the process. We could call this “soft power innovation”. Soft power is “the ability to attract and co-opt, rather than by coercion (hard power) … to shape the preferences of others through appeal and attraction”.

Local service providers are still contracted to collect the waste and the City still manages the process. Everyone keeps their jobs, but they need to do them better. The residents and the data management tool empowering the City bring an efficiency to the process using simple tools already in their lives.

Open the Platform and Data

The winner developed an app called OurMoz, which submits reports to the MOPA platform from any Android-enabled device.

The hackathon allowed the UX team to expand its user base to include smartphone users and practice being collaborative and open in textbook style. It also set the tone for the underlying platform to be used for other civic participation use cases.

SMS notifications allow residents to receive confirmations of their submitted
reports, and update them on the status of the report. In the City’s offices the reports are published on an online map, which the municipality uses along with a dashboard to track, validate and verify with the waste removal companies when each issue has been resolved. The resident is then notified via an SMS sent through the platform. Such a feedback loop shows that the municipality is transparent and responsive.

Overall, the results are impressive: more than 88% of reported issues are resolved, with an average response time of 2.7 days. 186 informal dump sites across the city have also been eradicated. MOPA is an exciting example of simple innovation using the tools that people have. Aside from moving towards a cleaner city, perhaps the biggest impact is the empowerment residents feel by playing their part in this process. That is a key foundation of digital inclusion.